How To Deal With Frozen Squid 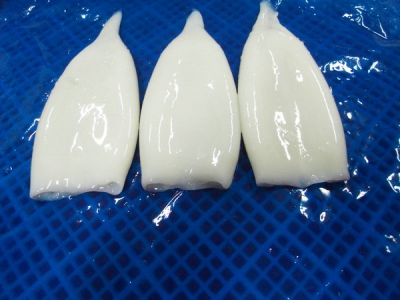 First, take a complete frozen squid that has been cleaned of the internal organs and torn off the black membrane. What we want to use is the body part, spread out, the inside is facing up, the inside is to be cut, if it is cut outside, it will not be able to make a squid flower, it will become a straight fish. The remaining squid must be cut and left for use

Second, the kitchen knife and the meat surface at a 45-degree angle, starting from a corner, a horizontal line, gently light it, be careful not to cut. The angle of 45 degrees is not easy to cut, and the effect will be beautiful.

Third, change the direction, and cross the previous horizontal line into a cross. Cut it in the same way, and after you have used the knife, it is like this.

4. Cut the squid into pieces of uniform size. The shape can be arbitrary, and the effect of cutting the square bar is better.

5. After the squid is rolled up, it can be fished up. Make a variety of delicious foods that you like. Such as sauce squid, snow squid, leeks and squid.

Before drowning, you can put ginger slices, onion slices, lemon slices or mustard oil in the water. It will be better to get the squid smell, because these things have the obvious effect of removing the squid.